Culture Ribbon of Fortified Monuments
on the Elbe River 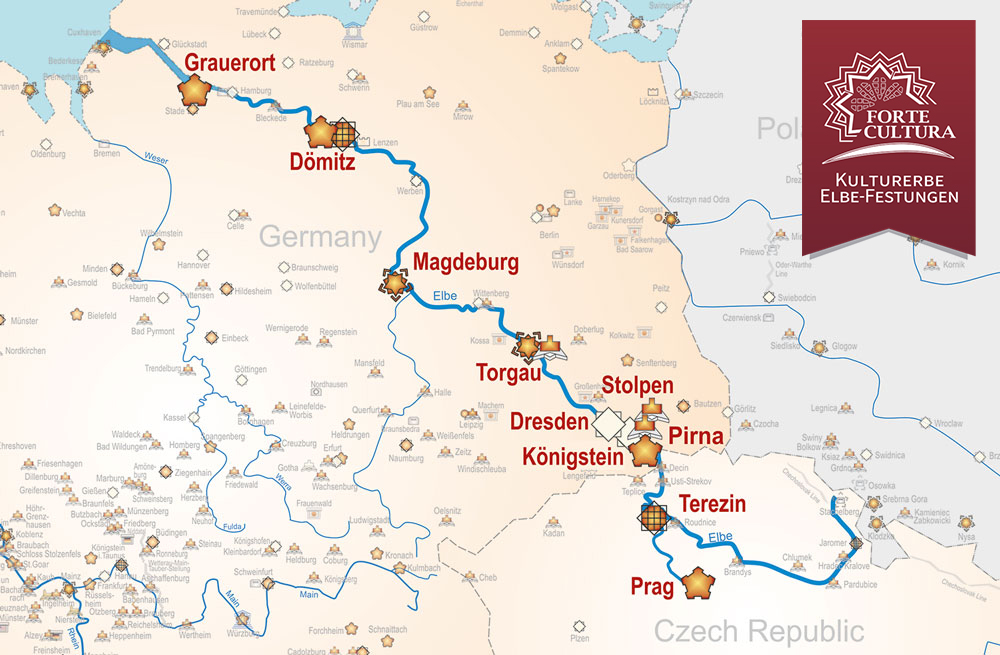 From its source in the Czech Krkonoše Mountains to its mouth in the North Sea near Cuxhaven, the Elbe River connects 1091 km of magnificent cultural landscapes. Today, the Elbe touches UNESCO World Heritage Sites, nature parks, biosphere reserves or the Elbe Sandstone Mountains, consisting of Saxon and Bohemian Switzerland. But it was also fiercely contested and heavily fortified for centuries as a border river of principalities, kingdoms and republics.

There are 25 fortified monuments along the course of the Elbe from the period up to the end of the 19th century, including the Saxon mountain fortress Königstein, the Habsburg twin cities of Terezin and Josefov as fortified ideal cities, the Prussian major fortress of Magdeburg or the Prussian artillery outpost Grauerort, the Saxon state fortress Torgau or Mecklenburg's fortified ideal city and citadel Dömitz. The former fortified city Dresden, the fortified Castle of Stolpen and the fortified Palace of Sonnenstein in Pirna complete the series of exciting fortress monuments on the Elbe river.

Every year, tourists conquer these monuments, peacefully and enthusiastically, e.g. along the Elbe Cycle Route. Discover the exciting "architectura militaris" on the Elbe with FORTE CULTURA®.

The fortresses and museums along the Elbe offer a wide range of events as part of the European Fortress Summer 2021. Many exciting events and cultural events for young and old are planned between April and October (please note the current Corona information on the organisers' websites).

The FORTE CULTURA Flyer Elbe-Festugen mit Eventliste gives you a good overview. All events can also be found in our FORTE CULTURA online event calendar.